VIA Rail's 2021 Annual Public Meeting took place on May 27

The information below is available for your reference

Annual Public Meeting of VIA Rail

Annual Public Meeting 2021 of VIA Rail

The link above will take you directly to the video released by VIA Rail of the 2021 Annual Public Meeting; this video is available on YouTube.

Questions and Answers from the audience

Each year, VIA Rail holds its Annual Public Meeting to provide Canadians with an update. Do you have a question about VIA Rail services? Now is the time to ask! Answers to the most frequently asked questions will be posted on VIA Rail’s Annual Public Meeting page on the day. For more information, including how to submit a question, visit
https://corpo.viarail.ca/en/company/corporate-information 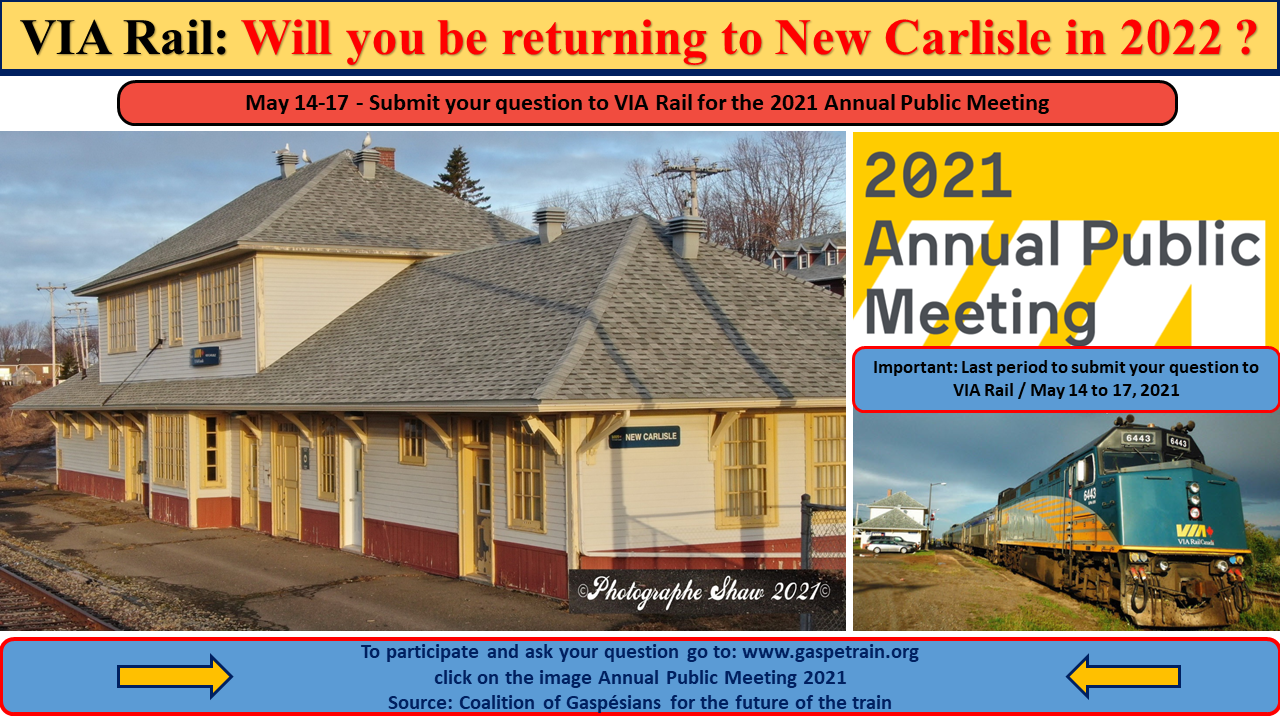 Example #1: Return of VIA Rail service to New Carlisle in 2022

Example #2: Return of VIA Rail service in Gaspésie (Gaspe coast)

Could VIA Rail show its interest in returning the train to Gaspé, whose service has been completely interrupted since August 22, 2013 (almost 7 years!), By proposing a partial return from 2022 to  New Carlisle. Infrastructure work is progressing well on the Gaspé railway.

Since the track will be completely renovated in the fall of 2022 to New Carlisle, and ready to receive passenger service, I hope your saying ”love the way” will apply and that you will offer the service to New Carlisle, after this long downtime. We really hope so.

Example #4: Service to the Gaspé coast

Transport Quebec has said that the Rehabilitation of the railway line between Caplan and Port-Daniel – Gascons will be completed by 2022. What are VIA’s plans to resume passenger rail service to New Carlisle as VIA’s former president has promised? What equipment will be used?

Example # 5: An important service for the Gaspé population

Passenger service to New Carlisle ended in 2013. In the meantime Orleans Express has cut service in half. We need the train for medical appointments in Quebec City and Montreal, to visit friends and family, and our students to go to university. When will VIA Rail resume service on the Gaspé coast?

Gaspesians have always used our passenger train. In 2011, 27,991 passengers took the Montréal-Gaspé train. We are ready for the train. How long do we have to wait?

Example # 7: The quality of service is reduced

The services of a dedicated Montreal – Gaspé train to serve the Bas-Saint-Laurent and Gaspé regions would make it possible to offer better quality service to all travelers and allow better ridership in the long term. Over the years, on many occasions, the Montreal – Gaspé route, paired with that of the Montreal – Halifax train, had to be interrupted at New Carlisle, leading to additional costs for bus rental but above all by creating dissatisfaction among  travelers before completing their route from New Carlisle to Gaspé by bus. The travelers chose the train, not the bus. As we want to optimize costs too much, the quality of service has just been reduced.

Example # 8: Quality service meeting the needs of travelers from the Gaspé, Quebec and Ontario

Suggested car additions to make this long trip more popular with travelers: A dining car aimed at travelers to have a good meal at an affordable price; an observation car allowing travelers to observe the beauty of Baie-des-Chaleurs and a panoramic car (Park car) aimed at making this train a top-of-the-range tourist attraction, like the iconic train ” Le Canadien ”. The Montreal – Gaspé trip means 17 hours of driving and more than 900 kilometers of travel.

In a post pandemic world people need mobility. The passenger train will help grow the economy and provide easier access for tourists and also for people coming from abroad to work in Gaspésie. Will VIA Rail return to New Carlisle in 2022?

VIA Rail is mandated to operate passenger rail services to regional communities such as New Carlisle and Gaspé. Since New Carlisle has a wye to turn the train and the track will be safe in 2022 will VIA Rail be ready to resume service at that time?

We could use the passenger train service to transport small packages; in the United States, Amtrak contributes to the distribution of United States Post mail. VIA Rail could transport medical samples from Gaspé, to Rimouski or Quebec.

Can Via Rail guarantee regular service to Montreal – New Carlisle at first, then Montreal – Gaspé upon completion of the work on the railway and the bridges?

Can Via Rail do this at favorable rates?

Will Via Rail be releasing the dome car for the summer season?

Will Via Rail offer a full catering service or at the very least, a sandwich / soup / beverage service on the Montreal – Gaspé – Montreal route?

Is Via Rail open to new ideas such as a dome car lined with a children’s play area on the Montreal – Gaspé – Montreal routes?