The Coalition of Gaspesians for the return of the passenger train does not support or oppose any political party in the current Quebec election campaign. It does, however, ask each of the parties running candidates in the Gaspé Peninsula to take a firm stand in favour of the immediate resumption of passenger rail transport in the region. The Gaspé Peninsula has been without passenger trains for nine years now. For several years now, VIA Rail has been repeating at its annual public meeting that service will resume once the track repairs are completed to Gaspé.

Why wait until the track repairs reach Gaspé? After the investment of significant amounts of money in track and bridge repairs, notably by the Ministère des Transports du Québec, the Société du chemin de fer de la Gaspésie confirms that the condition of the tracks allows for an immediate and safe return of VIA Rail passenger service between Matapédia and New Richmond. By the fall of 2023, we believe the track will be fully accessible to New Carlisle.

The Coalition believes that VIA Rail is not fulfilling its mandate to provide adequate rail service to the people of the Gaspé Peninsula by unnecessarily lengthening delays. The population of the Gaspé Peninsula and elsewhere could now benefit from a comfortable, safe and environmentally friendly transportation service, even if the entire line cannot be served at this time. A gradual return of passenger trains is more than desirable, it is necessary.

As aspirants to form the next Quebec government, the political parties cannot remain indifferent to this issue which affects VIA Rail, a company mandated and largely financed by the federal government. The tracks are ready to receive passenger trains now between Matapedia and New Richmond and New Carlisle will be accessible as early as fall 2023. The Coalition is seeking commitments to resume service between these two communities immediately. 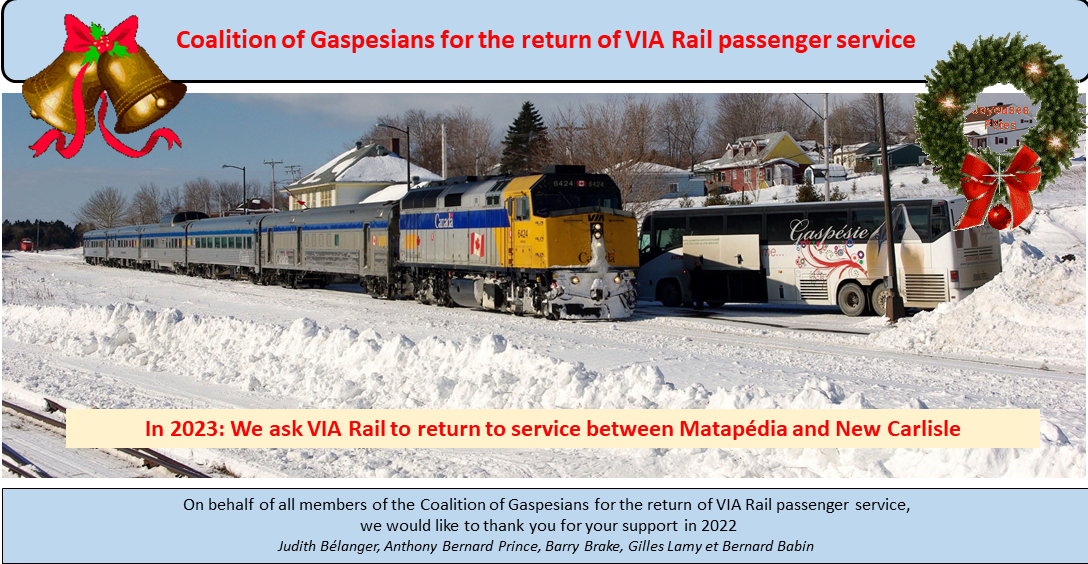